During the COMPOSITES EUROPE trade fair in September 2008, the German Federation of Reinforced Plastics, AVK, released its latest estimates on the composites industry in Europe.

European production of glass reinforced plastics (GRP) in 2007 was up 5.6% on 2006, with total European production reaching 1195 tons, according to the AVK's estimates (Figure 1). (Its figures are based on a survey of raw materials suppliers and relate only to glass fibre reinforced composites.)

A breakdown of total production volume by production technique shows that the open mould processes of hand lay-up and spray-up are still the most widely used in Europe (Figure 2). This production is mainly targeted at the building and construction sector (including housings for wind turbines), utility vehicles, recreational vehicles and boats, sanitary products, as well as specialised applications where parts with large surface areas (such as gliders) are produced in limited quantities. The many small- and medium-sized companies operating in this sector, which taken together account for a considerable market share, are still relying on these processes because of the relatively low investment cost and few tools needed. Production using hand lay-up was up 5.2% in 2007 from 2006, while use of spray-up increased 3.3% from 2006.

Production of parts by resin transfer moulding (RTM) experienced a above-average increase of 13% from 2006 to 2007, accounting for about 10% of the entire GRP production in Europe. This growth is mainly a result of the substitution of open moulding processes as well as the small-scale production of component parts with large surface areas. Applications for the resulting components, with their two smooth surfaces, include recreational boats and also the rotor blades of wind turbines.

Following record growth of 8% in 2006, the production of thermoset sheet moulding compound (SMC) and bulk moulding compound (BMC) increased by only 2% in 2007. A slowing down in BMC production – which is focused on electrical and vehicle headlight reflectors – was particularly noticeable, while SMC production increased by 3.2%. Processors see future growth potential in truck and car parts, and also in new markets, including those outside of Europe.

The production of corrugated and flat sheets by continuous processes increased by 2.9% in 2007, while the market for pultruded GRP profiles continued to show above-average growth of 8.7%. This sector is heavily influenced by demand from the building sector. Demand from new bridge building projects, as well as for cable ducts, benefited the profiles market.

In 2007, production of GRP pipes achieved a slightly above average growth, although the processes of filament winding and centrifugal casting showed very different growth rates. This sector is seeing enormous potential from new sewage system projects and sewer system renovations.

The industries using reinforced plastics showed only marginal changes in 2007 from the previous year. The construction and transportation sectors remain the largest users of reinforced plastics in Europe (Figure 3) , although individual countries may differ in the primary areas of application of composites.

The AVK has also estimated the production volumes for various European countries/groups of countries. This shows that the leading players are Spain, Italy, Germany, the UK and France, which together account for over one third of Europe's total reinforced plastics production. Data on the Central and Eastern European countries is difficult to find, although these countries offer significant growth potential for the composites industry.

The AVK has also categorised the countries in accordance with their growth potential – either low, average, or considerable:

In Eastern Europe, estimates put 2007 production volumes for Poland at 70 000 tons and 23 000 tons for the Czech Republic, with the remaining 54 000 tons probably shared between Hungary, Romania, Serbia, Croatia and Macedonia. There is still no information about volumes produced by other Eastern European countries. The former Russian states, for example, promise enormous potential for composites for pipes and tanks, for example, as well as the Middle East. Annual growth rates of 20% could be seen in the next few years.

In the Scandinavian countries the focus in 2007 was primarily on applications in the sectors of boat building, and pipes and tanks, each accounting for approximately one-third of the total production volume. These were followed by windows with about 15%. In Finland, boat building accounted for over half of the total volume.

In France, SMC/BMC parts account for almost half of total reinforced plastics production, while in Italy the emphasis is on production of sheets, followed by pipes and tanks. Tanks are the leading application in the Spanish market, accounting for almost 40% of composite production volume. In Germany, the automotive industry and the wind energy sector are the leading users of composites.

According to Dr Elmar Witten, Managing Director of AVK, all companies in the composites value chain (raw material producers and distributors, processors, machinery and technology suppliers, service providers and the application industries), irrespective of their own market position, are facing considerable opportunities as well as risks with regard to the future market.

Opportunities arise from the pressure industries are under to reduce energy use, and costs, by producing increasingly lightweight structures without affecting their strength. One example is the civil aircraft industry. There is also potential for more automation and computerisation in the composites industry, considerable opportunities for product innovation, as well as enormous potential in those parts of the world that show a strong industrial development. Examples include the transport markets in Asia, as well as the construction sector in Eastern Europe.

Witten believes that the greatest risks (for both producers and processors) arise from raw materials, energy and shipping costs, the international competition associated with globalisation, and the requirements of regulations and legislation (such as the new REACH regulations on registration of chemicals). Another factor is the lack of acceptance of fibre composite materials, which still prevails in the development departments of the industries using composites. In addition, small and medium-sized supplier companies in particular are facing problems because of their considerable dependence on customer industries – especially in oligopolic markets.

Last, but not least, he notes the shortage of skilled personnel is a bottleneck for the industry.

Opportunities and risks are also associated with the economic development of the plastics industry as a whole, as well as with the development of individual industries using reinforced plastics. Generally speaking, after achieving positive results in 2007, double-digit growth rates may be realised in certain sectors in Eastern Europe in 2008, says Witten, while there are some stagnation trends in Western Europe. Recent surveys in Germany have shown that current business expectations for the plastics sector tend to be less optimistic than in previous years. This is also being observed in other European countries and to a certain extent in the composites industry as well.

The relatively large flexibility with regard to the manufacturing scope is certainly to be considered a definite advantage of processors of reinforced plastics. Many companies are also highly flexible with regard to the geographic expansion of their operations. Medium-sized companies too are willing to invest in global expansion. Weaknesses include insufficient marketing and sales efforts and Witten believes that by joining organisations such as AVK, companies will benefit from professional support and increased promotion of the advantages of composites. 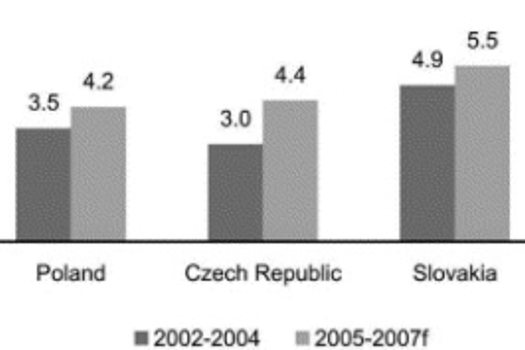 The emerging market in Eastern Europe

The composites industry in Turkey 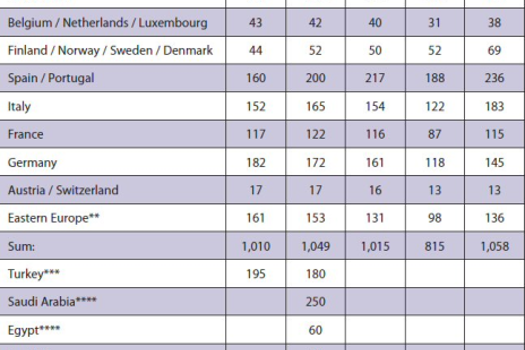 The European GRP market in 2012